I am trying to create a workflow where the initiator would fill out a form and then it would be sent to a reviewer and the reviewer can reject or approve.


So I make use of the branch by stage but the main issue is trying to have the variables of the start form be changeable/updated when the initiator fills out a form (that resembles the start form)? I will explain further.


I have the initiator fill out a new form that resembles the start form since there does not seem to be a way to go back and have them work on the already filled out start form but modify that.

@Anhthu I think the best way that you're going to be able to accomplish this currently is chaining together tasks. I know the NWC team is working on a better experience for this type of scenario, but currently you would need to pull comments through from the start form to the task to the follow up task. For example:

I can have a start form that collects comments:

Those comments can then be reviewed in the first task: 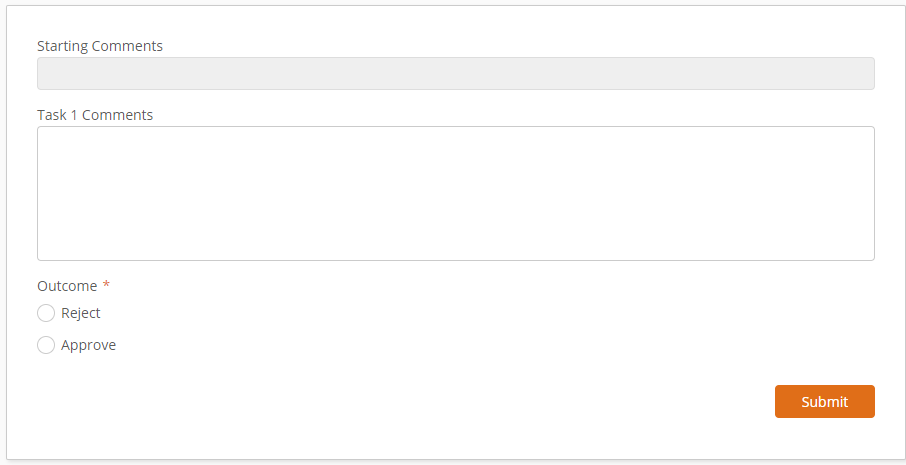 And then additional comments could be provided if the second task was assigned to the submitter: 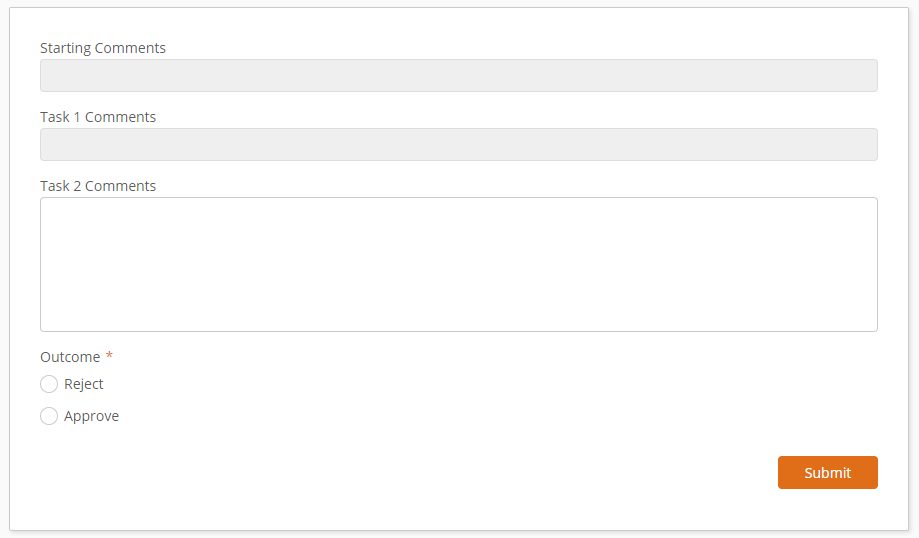 The information from each previous task becomes available within the configuration of the subsequent task form designer: 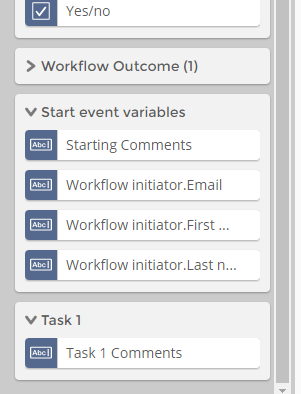 @butlerj Thanks. I was thinking about this approach but I am wondering how would we be able to implement this if (in theory) the submitter and reviewer ping pong this back and forth several times instead of 1 time. I know realistically, it will at most just be 2-3 times where it gets sent back and forth but it would be awesome if there is a way to have it handle a scenario where this happens indefinitely. This was one of the reasons why I was thinking on how to change the existing variables instead of making new variables/fields.


I have used used the approach you mentioned in a different workflow where it involves multiple reviewers and gets passed to each one down the line but I also ran into the issue where what happens if the initiator and multiple reviewers don't reach an agreement for the first several times.

I was able to implement this and ended up creating quite a handful of workflow variable and set the value to what the initial form had, then update the workflow variables after the review form was sent out and also update the workflow variables when the initiator sends out the revised form. In theory, this seems to work when I was thinking it through but I guess I will find out soon enough! My workflow is a lot more complicated though so it will be nice when Nintex offers a simpler solution than the workaround I have tried (assuming my workaround is a working solution).

@Anhthu glad to hear that you were able to implement it. Another thought that I had would be leveraging something like a State Machine in the workflow, but that would also require quite a few different variables to be able to pass the right information between the various tasks.

I have done this using a state machine.  After the initial form, I load the form values into variables.  I also have a notes variable.  After the review, if it is returned to the sender, I load the comments into the notes variable.  The state machine returns it to a correction step which is a copy of the original form and the variables are the default values of the fields.  After the corrected form is submitted, I updated the variable values before sending through the approval cycle again.  This can be done as many times as needed.  There are two areas where this does not work well:

1) People fields that are populated from Active Directory do not have default value so I am not able to update the people populated fields.

2) I haven't found a way to update table values yet.

One issue with this is when you have a lot of fields in your form - that is a lot of variables....

I have heard that Nintex is working on a way to be able to modify the original form but do not know the status of that.  This would be a huge help!