If data from group A has been submitted, then show group B.

You must have a criteria to distinguish if the user submitted the form or not. To achieve do the following:

What type of column is Submitted, Number?  I am using the New Responsive Designer so there are no Save Button settings.  Also, I don't an option to add a button to the form.

And right, New responsive designer does not have a button control.

If you have any criteria to distinguish or identify when to show the second group, you can set the "Submitted" column value to "1" using workflow also. Hope this helps.

I am able to create a column with Number as the type.  However, the Submit button will not connect to a number column or Yes/No column.  The only way it seems to be working is if I create a Text column and set the default value as Yes.  See screen captures below:


FYI - The Review and Approval Section is the second group that should appear after the Submit button is clicked. 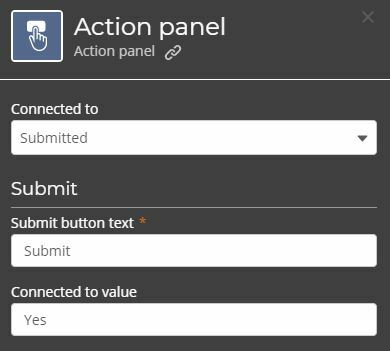 Ok, with yes/no, is it working the way you want?

H
Can you explain further how to use a Nintex workflow to set the "Submitted" column value to "1"?
R

Am I missing something or could you not just use the Form Mode in your initial Group hide?  Then also apply your If data from group A has been submitted, then show group B as another rule.

If you are using the new responsive forms, and you don't have save and submit set up, just create a rule based on the form mode:

If the form is New Mode, then hide your group. Otherwise show it.