One of the most requested capabilities for Nintex Workflow Cloud has been the ability to assign a single task to multiple individuals, so a task can be completed by one of many or by collaborative decision-making.


We will be making a number of updates to Task capabilities in Nintex Workflow Cloud over the coming months, starting with a new action in the workflow designer: Assign a task to multiple users.

To see it in action, check out Chris Ellis' (Director of PreSales) awesome video.

You still be able to look up assignees from your User Directory or your tenant's User Management, or use a collection variable of email addresses.

For now, up to 10 assignees will be sent their tasks all at once. 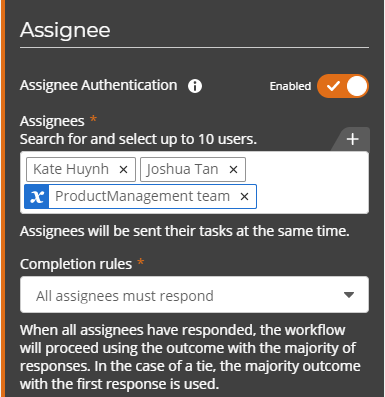 The Task management page in Automate has been updated to provide an view of a task's overall status. You'll be able to see who has responded, which tasks are still outstanding, and the winning response of a completed task.

This is a task that has a Completion rule of 'First response completes the task':

Assignees will only see their own task in My Nintex, even if it is a part of a larger multi-user task.

For Authenticated tasks, the action will also capture the 'responder' of each task, so you can easily identify and manage the responses per assignee. This is important in the case of escalation or override where another user may respond on behalf of the original assignee.

If Multiple outcomes is enabled, the outcome selected by each assignee is also stored.


As there are multiple responses to collect from all assignees, the output of the action will be a collection of objects. If you would like to use the output, it is recommended you first use Loop for each, to extract out each response.


Further enhancements to look forward to in the coming months:

It's been over a year... Still waiting on the ability to assign tasks to groups (rather than users).

And even more important: Allow sending mail to shared mailbox, but assignement to group. As most companies using Nintex are big companies, this is a typical business requirement.