I would like know how to have the SharePoint 2019 responsive form respond to the change in value of a dropdown control to update the value of another control, specifically of the yes/no or dropdown (with Yes and No as options) type.


In responsive mode, it doesn't seem to support custom JavaScript (as classic would).  I found 1 rule type that sets the value of a single line text box based on a dropdown, but I don't want the target to be free-form text, rather something selectable like yes/no or a dropdown.


as far as I know it is not possible to do that in responsive forms.

Before I give you the answer to this, I really want to stress that while it *can* be done, it is NOT supported and is unorthodox.

It could break during an update.

It could break because Nintex decides they don't want people doing it.

It could break for any number of reasons!

Be aware that solving the problem this way could lead to a functionality that is, essentially, undocumented and hidden from anyone else who encounters this work at a later date!


Alright. Warnings out of the way, here is some context. Because the Rule System of a form is essentially just a place where you're piecing together little snippets of code (or text that gets compiled into code when it's served to you proper), you can actually use javascript inside of it outright. This is why you can use stuff like || and && (logical or, and logical and) inside of it without needing to use the runtime or() / and() functions that they give you.


To read more about how the Rule system works in detail, please see my article on the matter here: https://community.nintex.com/t5/Community-blogs/Breaking-The-Rules-A-Dive-Into-The-Nintex-Forms-Rule-System/ba-p/78874


Here is a Responsive Form with a Drop Down Choice Control next to a Yes / No Control:

The Controls are Configured as such 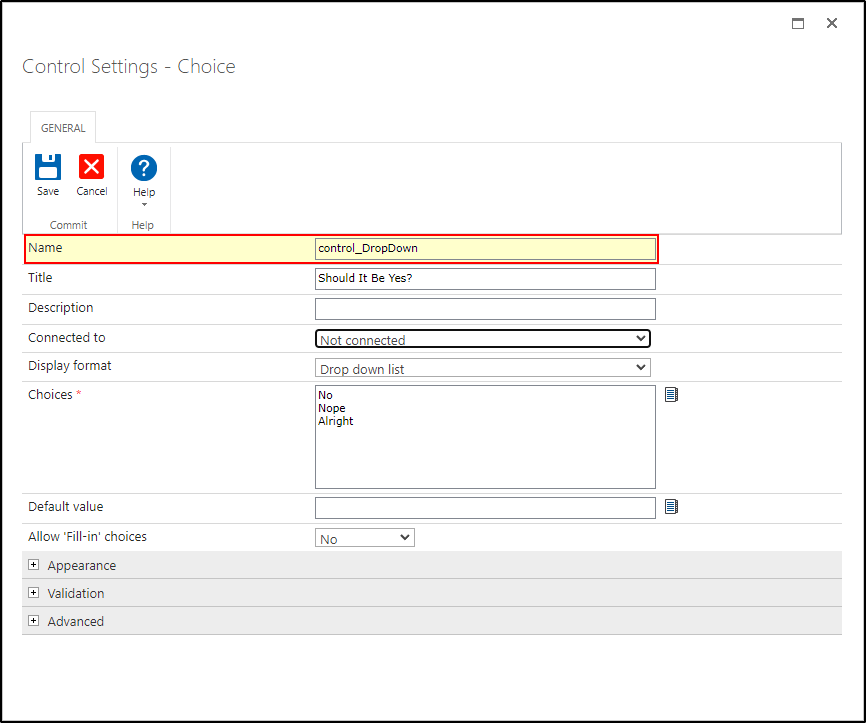 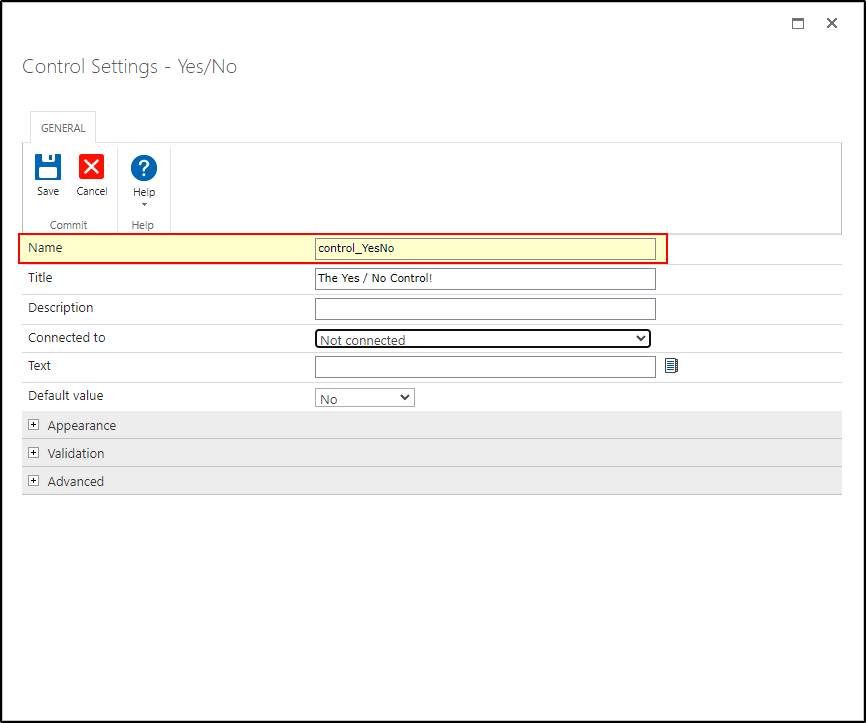 Selecting the Yes/No Control, I am going to add a Rule to it 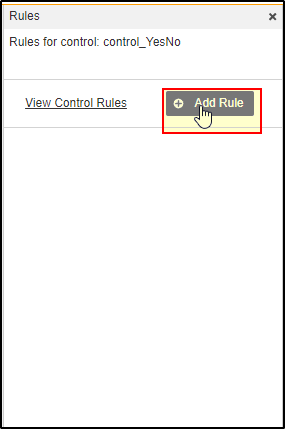 Then, in the order shown, rename the rule, set the rule to disable, and then click on the formula editor: 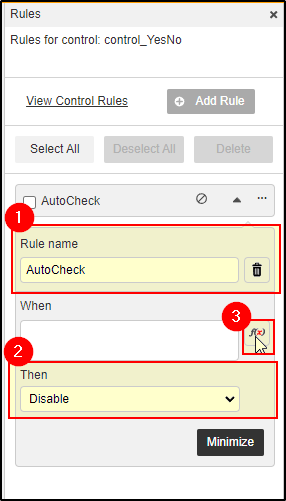 Inside of the Formula Builder goes the following code:

As shown, you need to replace the text of *control_DropDown* with the NAMED REFERENCE of the dropdown control in question. Because I named my dropdown choice control to "control_DropDown", I erase the word *control_DropDown* near the end of my code and replace it by double clicking the Named Reference. If you did it correctly, it should be in red as I show here: 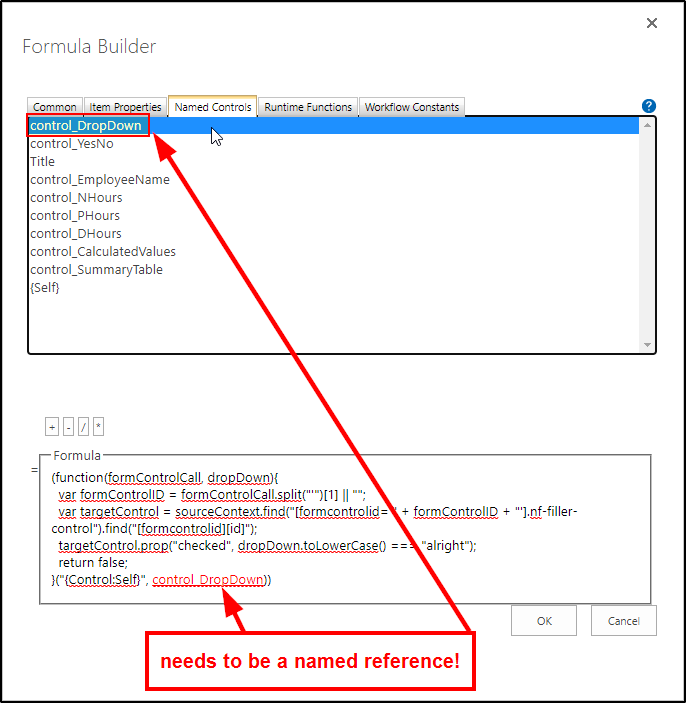 Now when we launch the form we can see that whenever we select the "Alright" option from the Dropdown, the Yes/No control is checked:

All that said, this doesn't prevent someone from just changing the checkbox to any particular value they want. If you'd rather lock it down, then you can simply go back to your rule, and change the return value from false to true: 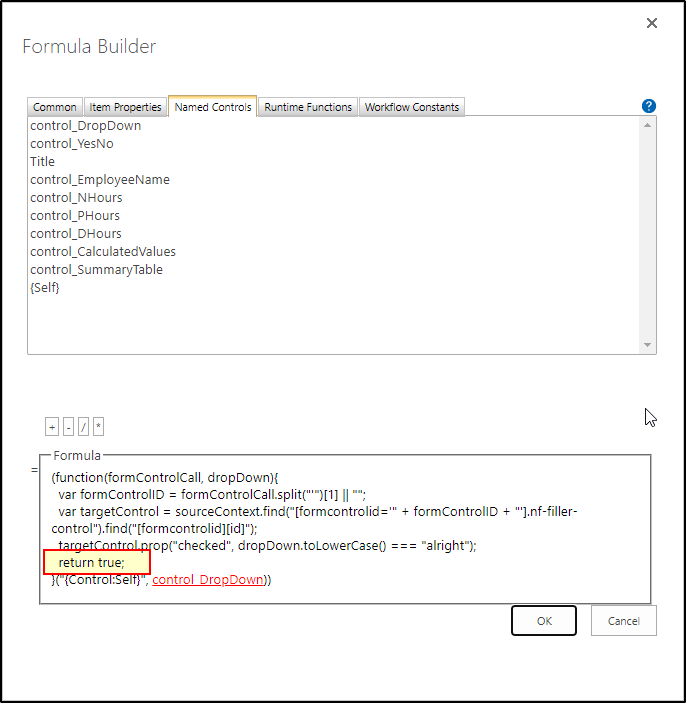 Now the Yes / No Control is *always* disabled, but can still be toggled by our code:

I hope that this has helped to build a better understanding of the Rule System and what can be done with a little code. Let me know if you need additional help or if this has solved it.


Additionally if you would like an explanation of how that code works, let me know.

Thanks a lot, that's really neat!  I hadn't encountered the ability to put code directly into the formulas (although I have been using && and || without knowing that was why it works).  I've bookmarked the article you shared and will read through it sometime for more ideas.


I did come up with a separate solution that suits my current needs in this situation (and also is Nintex-"safe"), which I'll describe as follows for anyone that wants another solution:

Here I have false b/c I found from trial and error that Yes/No actually returns true/false.


So while this doesn't directly solve the problem as stated (which is to control the Yes/No box directly), I get a value saved on Approval Required I can use in the workflow, that will be false when the dropdown has the particular value, and the value of the Yes/No box any other time (which is really what I needed functionally).

good to see that you have solved it, and in a safer way!


Don't forget to mark your answer as the solution to this problem.