How to change when actions execute in the Rule Designer using K2 smartforms 1.0.5 or greater

How to change when actions execute in the Rule Designer using K2 smartforms 1.0.5 or greater

K2 smartforms
LEGACY/ARCHIVED CONTENT
This article has been archived, and/or refers to legacy products, components or features. The content in this article is offered "as is" and will no longer be updated. Archived content is provided for reference purposes only. This content does not infer that the product, component or feature is supported, or that the product, component or feature will continue to function as described herein.

The latest How To topics are available in the K2 Five User Guide or the K2 Cloud User Guide’s How to section.

When actions are added to a rule, they are added at the bottom of the rule statement or definition. Actions can be moved up or down to execute in a different order. You can also change how the actions are grouped together into execution blocks. These execution blocks can be moved up or down to ensure that the rule behavior is as expected. Execution blocks can either be sequentially, concurrently, in a batch or asynchronously. The use of these blocks can affect how the rule executes and are best used based on the View or Form’s scenario.

At the front of each action statement, there is a word that can be changed. This word (then, and, also or asynchronous) affects how the action is called:

Take a scenario where you have a rule and you want some actions to execute one after another. When those are complete, you have another set of actions that you would like to execute asynchronous (both for performance reasons and because they aren’t dependent on each other).
When adding actions, each statement is automatically added in one execution block as shown below:

To split the group, select another statement located in front of the action. 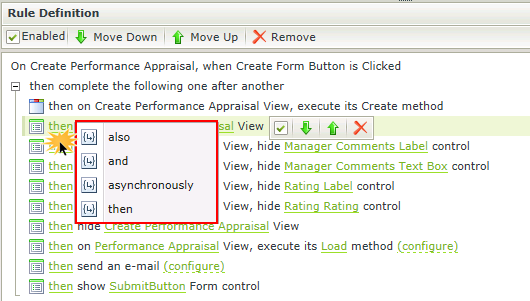 A new line is added, which describes the execution block: 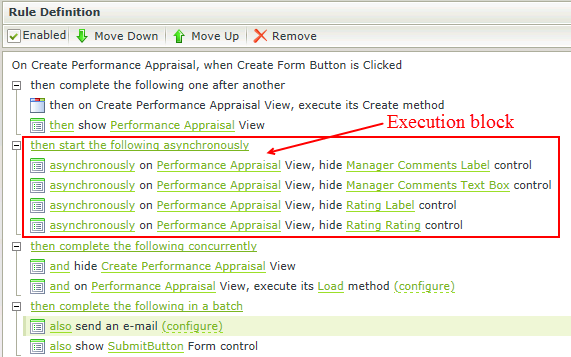