KB001242 - Known Issue: The K2 Features deployment remains in a status of “In Progress” when upgradi...

KB001320 updates all K2 blackpearl 4.5 and K2 blackpoint 4.5 installations with the latest product hotfixes, as detailed below. The installer will update K2 4.5 32-bit and 64-bit installations.

The following issues have been fixed and are contained within this update: 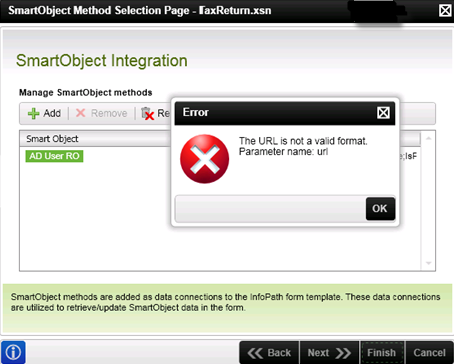 This error is masked by a problem with SQL transactions but is actually caused by a timeout. Enhancements have been made to make the timeout on the command objects configurable.

Example of a configured command timeout value of 120 seconds.

Errors experienced with OpenInfoPathTask.aspx after installing K2 4.5 Update KB001290 on non-English environments
Error Message:
"Server was unable to process request. ---> Object reference not set to an instance of an object"
The error is thrown when a user clicks on the worklist item in order to action the tasks. It is caused by attempting to retrieve the “Form” content type on the SharePoint site. However, there is no such Content Type in certain environments such as a French system, since the name for “Form “ in French is “Formulere”.

This update includes the hotfixes included in previous K2 4.5 Updates, so there is no need to also install the updates listed below. The following links are provided for reference to view the enhancements and resolved issues contained within the previous updates:

There are a few known issues with this update. For more information, download the PDF from the link available on the right hand menu bar and read the following KB article:

KB001242 - Known Issue: The K2 Features deployment remains in a status of “In Progress” when upgradi...