Can anyone help me? Should I be creating a rule? Or something else? Thanks!

This is indeed possible. It's called Cascading Lookup, and is a common thing in the world of Sharepoint.

There is a quickstart guide on youtube that I found which may be of use for you: https://youtu.be/4YpDC5pFcEY

That should at least get you somewhat familiar with the idea. However when I do a cascading lookup, I usually like to separate my lists out a bit more, and group my data differently so that it is a little less work.

In the following example I have made two lists:

(note: notice that these are plural!)

Rate Types is pretty simple. It only has one column, Title, which has been renamed to "Rate Type", and it only contains two rows:

The other list, Rate Elements, has two columns. One is the default column, renamed to Rate Element, and the other is a special Lookup Column called Rate Type. Here is how I made that column:

It is important to see this configuration if you are to replicate it on your own. This Lookup Column is getting it's information from my other List called Rate Types. "In This Column" is asking where the values I'd like to pull over should come from. In this case I want to pull over the values from the column "Rate Type". I'm also making sure that the "Allow Multiple Values" button is checked.

Once that was setup I populated the Rate Elements:

I then also set the Rate Type for each Element:

Notice how on the last item, Indirect - Labor, I set the Rate Type to equal both Incurred and Forward Pricing.

If I go back to the Nintex Form, I can then setup the Controls needed to make this all work.

Here are my two Lookup Controls

In the first Lookup Control, RateTypes, I have configured it to pull its values from the Rate Types list that I made:

(Note: Remember that we changed the original "Title" column to a new name "Rate Type", however, the internal name of that column is still Title, so that's why I'm using that name here!)

Now that we have one of our Lookup Columns configured, we can configure the Rate Elements control. It's configuration is as follows:

Notice that this has that extra Filtering section expanded. You see that I've opted to Filter available selections "By a control's value". In this case that Control will be the only other control on my form, RateTypes.

The Field that I'd like to filter against, the "Where Field" will be the Rate Type lookup column that we made on our second list. And lastly the 'Action when no filter applied' should be to show nothing. That way if we haven't made any selections, it won't let you pick something arbitrarily.

Now that we have configured that, we should be able to test our results in a preview.

When we load the preview, because we have made no selections we see:

However when we select "Forward Pricing" from the Rate Types drop down, our Rate Elements populate with all of the Rate Elements that have a Rate Type containing the one we chose:

But if set our Rate Type to "Incurred", we only get that single value we associated it to in our Rate Elements list:

I hope that this helps you to solve your problem. if you're still having issues, feel free to ask more questions! 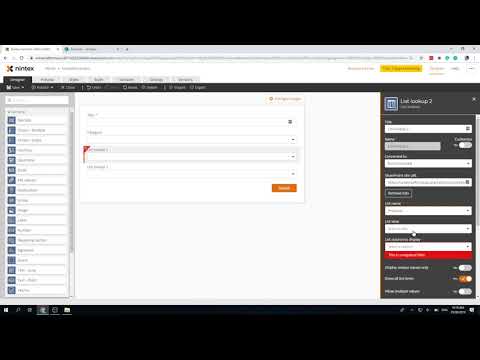 How to build cascading drop downs in the New Responsive Designer in Nintex Forms for Office365
youtu.be/4YpDC5pFcEY
In this video, I show you how to set up cascading dropdowns using the List Lookup control and filtering out unique items.
0 Kudos
Share
Reply

Thank you So much!! This is exactly what I needed.

One more question regarding this. It has worked perfectly but now I am trying to add the Rate Types and Rate Elements Impacted lookups to my SharePoint List. My values are showing blank for them even though they are filled out on the form. I am sure these are just pulling the old values that I had and that is why they are blank. How can I pull the date from my form into this list view? See Screenshot! Thanks again!