How to Deploy K2 for Visual Studio workflows in K2 Five

How to Deploy K2 for Visual Studio workflows in K2 Five

K2 Five
K2 Five (all)
Deployment
K2 Designer for Visual Studio
K2 Studio
This article was created in response to a support issue logged with K2. The content may include typographical errors and may be revised at any time without notice. This article is not considered official documentation for K2 software and is provided "as is" with no warranties.

It is important to understand the setup of your multiple environments. New installs of K2 Five do not have K2 for Visual Studio, and it is only included in the upgrade installation.

There could possibly be a scenario where a Workflow is created in Visual Studio, but the target does not have K2 for Visual Studio. When trying to Package and deploy this solution using the MMC tool, an issue appears that states: "Incompatible Workflow." See below: 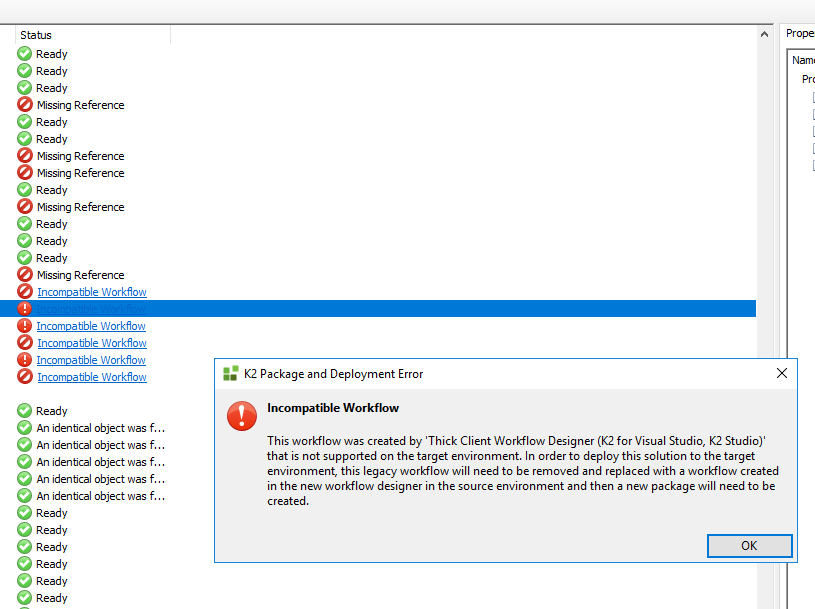 The reason for this is that the Target environment does not have the Visual Studio components.

2. Deploy the workflow directly to the K2 Workflow Server for the target environment using the Deploy button from Visual Studio.

- This will deploy the workflow directly into the K2 Workflow Server and can then be used automatically.