SmartBox Schema synonyms are removed after upgrading to K2 5.1 FP 19

This article was created in response to a support issue logged with K2. The content may include typographical errors and may be revised at any time without notice. This article is not considered official documentation for K2 software and is provided "as is" with no warranties.

After applying a fix pack above K2 5.1 FP 19, you'll notice that some of your other applications that are dependent on calling to the old SmartBox schema i.e. dbo.SmartBoxName (or if they are calling just the table name SELECT * FROM SmartBoxName,) will error and no longer return data. 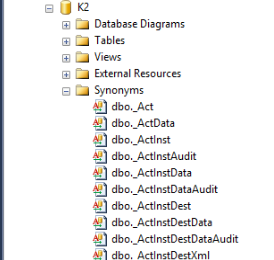 This behavior is expected and is by design. These synonyms were temporarily created by the installer when an upgrade from 4.7 > 5.1 was done due to the Smartbox schema changing from dbo to SmartBoxData. The synonyms were created in case there were any parts of the product still referencing the old schema name. They were removed once it was confirmed that these were no longer needed as they were not necessary.

Schema changes like this can occur at any time and direct querying from the K2 Database is not supported for reasons such as this. If you need to report on data from K2 via SmartObjects the supported way is to use the K2 SmartObject API to query these SmartObjects via code.