"Not authorized" or “…missing required rights…” page in SmartForms (K2 Designer) when you try to access the Designer or Runtime site.

When you use K2 4.7 and try to log into the K2 Designer or access a SmartForm, you see the login screen or you get the "Not Authorized" page. 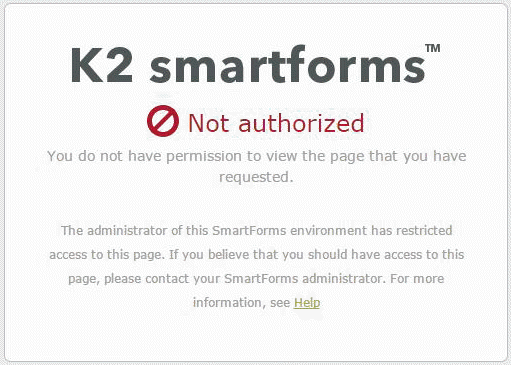 The message is shown when you access the site and the server’s IIS setting (Authorization Deny Rule) for you or a role you belong to is active.

As an administrator, you need to update the role membership or change the Authorization Deny Rule for anyone seeing this message. For more information see the Configuring .NET Roles in IIS (Microsoft)

To change this site’s Authorization Deny Rule, follow the steps below:

When you use K2 Five or K2 Cloud and try to log into K2 Designer, one of the following occurs:

This happens if you do not have access to the K2 Designer. See Authorization Framework Overview for more information.

An administrator that is part of the Security Administrators role must authorize you to use the K2 Designer.

Follow these steps to add authorization to K2 Designer: